Consistent and best practice form design makes our products intuitive. This means people can focus on their task without learning how a Co-op product works every time they use one.

Elements of a form

Forms can be made up of a range of elements.

Use a single column layout for forms

This allows the user to focus on one field at a time, making it easier for them to complete their task.

When form fields are in multiple columns, users have to scan across the page to understand the content. If they use a screen magnifier to zoom into the page they might not see some of the fields.

When each row of the form contains multiple elements it is harder to know what to fill in first, and the way to complete the form becomes unclear. 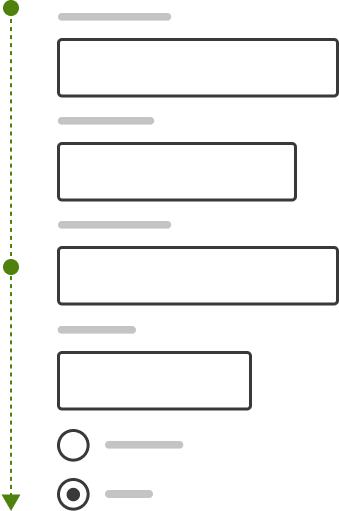 The flow from one set of questions to the next should have a natural progression from one topic to another. Grouping related fields helps with this and allows users to make sense of the information they need to fill in.

Sequence fields based on patterns that are natural for users or that reflect real things such as a credit card.

For example, for a credit card form, you should always start with the card number and end with the security code. This because it follows the layout on the real card and because whenever people enter credit card information this is the order they do it in.

Our form elements and components come with default padding. This example shows how these defaults apply to different form elements.

Do not use long forms

Lengthy forms can cause many usability issues, including overwhelming users. When you need to use a long form, there are design patterns which can help them feel less overwhelming.

Progressive disclosure is a pattern through which content is revealed gradually to the user. Content is usually revealed as the user fills in specific parts of the form. This can help forms feel shorter, with more fields only appearing when relevant.

On page load, fewer fields are displayed on screen. As the user interacts with the form, additional fields are displayed. Multistep forms are made up of multiple pages, with fields spread across pages. A multistep form can include a progress indicator to help users understand the different steps within a form.

When dividing a form into multiple pages, make sure that the content on each page is grouped. If 'Personal details' is the first step on a form, that page should contain all the questions relating to personal details.

Always put the label above the field. This helps create a clear relationship between the label and input field. They also make the form easier to scan, which helps improve understanding.

Give labels their own row. This allows the length to vary, without impacting the position of the field.

Use a text input that is appropriate for the amount of information someone needs to enter. While it may be tempting to make all text input fields the same width for a more uniform interface, it can lead to usability issues. Too wide and it might intimidate or confuse, too narrow and it might frustrate.

The width of the text input can act as a guide to the user for how much information is expected. This can help improve completion rate of a form.

Varying input widths help the user understand how much information is required in each field. Only highlight optional fields on a form, not the mandatory or required fields. Optional fields also should not have any validation rules applied to them.

To see how to style an optional field, go to the form elements

Forms vary in length and complexity. Consider what spacing is appropriate for your fieldsets. Think about spacing when moving from larger to smaller screens.

As well as our default spacing units, we also have CSS classes that allow you to experiment with variations of spacing. You can multiply the 2px, 4px, 8px, 16px, 32px or 64px by either 1.5 or 2 and use these values for spacing field sets.

For example, if your form requires a large vertical space, you can multiply the 32px unit by 1.5. The will give you a vertical spacing of 48px. Buttons that perform the main action on a form (such as submit) should always be left aligned to the edge of the input fields.

Right aligned buttons make the user shift focus from left to right and might be missed.

The button is still visible even when the user is zoomed into the screen. The button is not visible when the user is zoomed into the screen.

Place buttons in a logical order. A clear visual hierarchy between buttons on the same screen is important as it can help users identify the primary action easily.

Avoid having buttons of the same prominence next to each other. It can create confusion and force the user to question which action is the primary one.

The width of the button should be determined by the content inside it. Avoid making buttons full width (especially on larger screens) as they stop looking like buttons and can confuse users.

This is important for screen magnifier users, as the primary button content can be found without having to pan to the right. This ensures the product or service is accessible.

Do not use deactivated buttons on forms. Allow the user full access to all actions, even if that means the user fails and has to take an action to remedy the problem.

Placing these buttons at the bottom of a form takes prominence away from more important buttons, and creates confusion for screen reader and keyboard users.

It’s important to use space around the primary button to help give it prominence on the screen. Use larger vertical spacing between the last field set and primary button.

Which button styles to use

Changelog for this page

Give feedback about this page

Fill in our form to give feedback.